Hello all and happy Monday! We’re starting the week off right with some of the best items in fall produce. Take a peek at what you should be expecting in your bins this week… 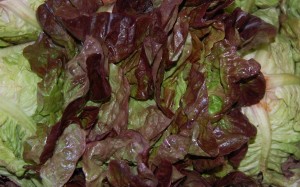 Delicious and tender, red butter lettuce is fantastic in salads! It literally melts in your mouth. How will it taste? Try this: scratch a leaf stalk; if it smells sweet, it will taste sweet; if it smells bitter, it will have a bit of a bite. 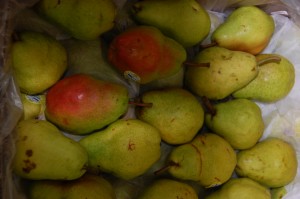 Bartlett Pears, some are blushing, some have branch scars, but they all will taste great!

The Williams’ bon chrétien pear, commonly called the Williams pear or the Bartlett pear in the United States and Canada, is the most commonly grown variety of pear in most countries outside Asia.The origins of this variety are uncertain. “Bon Chrétien” (Good Christian) is named after Francis of Paola, a holy man whom King Louis XI of France had called to his deathbed as a healer in 1483. Francis offered the king a pear seed from his native Calabria with instructions to plant and care. Hence the pear tree was called “Good Christian”. The Williams pear is thought to date from 1765 to 1770 from the yard of an Aldermaston, England, schoolmaster named Mr. Stair or Mr. Wheeler, giving rise to the now-obscure synonyms Aldermaston pear and Stairs pear. A nurseryman named Williams later acquired the variety, and after introducing it to the rest of England, the pear became known as the Williams Pear. However, the pear’s full name is Williams’ Bon Chretien, or “Williams’ good Christian.” 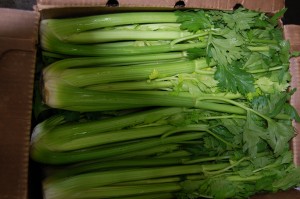 Hearty bunches of Celery from Glory B Farm in Gray’s Harbor, Washington 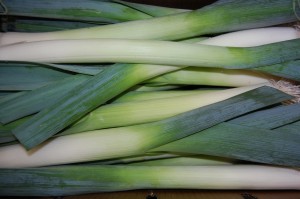 Picture perfect Leeks from Ralph’s. His leeks have earned him a great reputation!

Leeks are root vegetables that look quite similar to onions, to which they are related. Their flavor is onion-like but much milder. People who avoid this vegetable because they don’t like onions should try them — their flavor is mellow and not overpowering, and many onion-haters enjoy them.

Unlike onions, leeks don’t form much of a bulb on the end of the root. Instead, they remain cylindrical, with perhaps a slight bulge at the end. The part of that is under ground remains tender and white, while the part exposed to the sunlight becomes tough and fibrous and not very good for eating. To maximize the edible part of the plant, farmers mound the dirt up around the sprouting plant; this keeps more of it underground and white, but also means that dirt often gets between the layers, so leeks need careful cleaning before cooking. 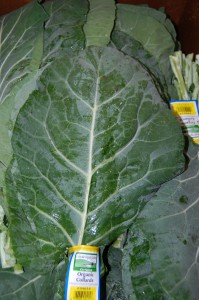 A member of the kale family, collard greens feature dark green leaves and tough stems. Because of their tough texture, collard greens benefit from slow, moist heat cooking techniques such as braising.

A traditional recipe for collard greens involves simmering the collards with a ham hock, or other smoked, cured pork products like bacon, and served with corn bread.

Other techniques for cooking collard greens include sautéing, baking in casseroles or simmering in soups and stews.