Hello all! Are you enjoying this beautiful weather? Enjoy it more this week with some delicious organic produce! Some of my personal summer favorites are in this week’s menus. Cantaloup, blueberries, black grapes, pluots, and nectarines are all available! That is a perfect fruit salad just waiting to be made! 🙂

One of our favorite veggies this week is often overlooked: the eggplant! A very versatile 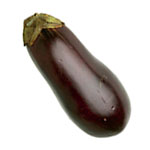 veggie, the eggplant is a great addition to many meals or is excellent on its own! Having a bland flavor on its own, eggplant can be made taste however you’d like! Let’s explore it a little more…

A Brief History: The eggplant is considered a vegetable but is botanically a fruit. Early varieties of eggplant were smaller and white, resembling eggs, hence the name. Eggplant are native to the general South East Asian region of India and modern day Pakistan and was first domesticated there over 4000 years ago, especially in the vicinities of Burma and Assam. In its home region, the Eggplant is used in many local dishes. Experimental botanist Thomas Jefferson brought the eggplant to the United States, where the eggplant was primarily used as a table ornament until the 20th century.

How to Store Eggplant: Eggplant is quite perishable and will not store long. Depending on the freshness factor of the eggplant at the time of purchase, it may be refrigerated for up to 4 days. However, it is best to use them as soon as possible, preferably within a day.

Handle eggplants gingerly, as they bruise easily. If you purchase them wrapped in plastic wrap, remove the wrapper, wrap in a paper towel, and place in a perforated plastic bag before storing in the refrigerator vegetable bin.

Cooked eggplant may be refrigerated up to 3 days (it will get mushy when reheated) or frozen up to 6 months in puree form (add a little lemon juice to discourage discoloration). It holds up fairly well in chunks in soups and stews when thawed in the refrigerator, but not as chunks on its own.

Delicious Ways to Use Eggplant: Eggplant is often grilled, sautéed or baked, seasoned with salt and pepper and topped with a tomato sauce. However, there are many more ways to use eggplant. Check out a few creative meals we found!

1. Heat oven to 400° F. Line a heavy baking sheet with foil.
2. Brush the cut sides of the eggplant with 1 tablespoon of the oil and arrange cut side down on the baking sheet. Bake until cut sides are browned and eggplant is soft (about 25 minutes).
3. Combine remaining oil and garlic in a skillet and heat over low heat until garlic sizzles. Stir in cumin and remove from heat.
4. Scoop out softened eggplant, chop finely and then add to skillet. Add ginger, bell pepper, and parsley. Stir mixture over low heat until blended. Add salt and pepper to taste.
5. Serve warm or at room temperature.
Casserole Serves 6

Preheat oven to 400. Line a baking dish with foil and spray with cooking spray to prevent sticking (and SUPER easy clean up!).

Layer the eggplant/squash mixture and Parmesan, alternating until eggplant mixture is gone. Top with remaining Parmesan (if any) and the Mexican blend cheese. Bake for 20 minutes (or until veggies are cooked to desired doneness).

Heat oil on medium heat, saute’ shallots and garlic for about 5 minutes.
Add eggplant, cook for 5-8 minutes until fork tender.
Slowly add tomatoes, beans and taco mix.
Serve warm.
Can use it as filling or for a taco salad.

What item are you most looking froward to this week? Tell us on our Facebook page!

This entry was posted in organic produce, Tips and tricks. Bookmark the permalink.