So Delicious, so organic!

fire up the oven

cool down on a hot day

we get you!
Organic Recipes > Salad or Side > Beet, Fennel and Fig Salad With Cranberry-Sage Dressing 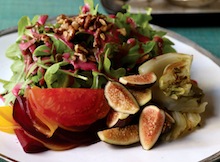 Site of the Week
Sunny Honey Company (normally found in Pike Place Market next to the fish guys) is where we get our delicious, unfiltered honey. They have so much more available to be shipped straight to your door, check them out! https://www.sunnyhoneyco.com