Hello all and Happy Friday! What better way to start the weekend off with than a 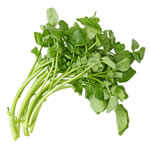 According to Wikipedia, Watercress, is a fast-growing, aquatic or semi-aquatic, perennial plant native to Europe and Asia, and one of the oldest known leaf vegetables consumed by humans.

Why is watercress so great?

Besides being known as “Mother Nature’s Multivitamin,” watercress is also delicious! According to Medical News Today, Eating watercress daily can significantly reduce DNA damage to blood cells, which is considered to be an important trigger in the development of cancer.

The research found that in addition to reducing DNA damage, adaily portion of watercress also increased the ability of those cells to resist further DNA damage caused by free radicals.

Watercress is the most ancient of green vegetables known to man and its use can be traced back to the Persians, Greeks and Romans. In fact, a famous Persian chronicler advised Persians to feed cress to their children to improve bodily growth. He also strongly recommended its use to the Greek and Persians soldiers of that time.

Hippocrates, the ancient Greek physician who said “let food be thy medicine,” so believed in the healing powers of watercress that he built his first hospital next to a stream so he could grow it. The Romans and Anglo-Saxons believed watercress averted baldness and Francis Bacon, a 17th-century English philosopher and politician, said it would restore women’s youth. Watercress’s Latin name, Nasturtium officinale, means “nose twister”—an appropriate description considering its pungent, peppery taste. Isothiocyanates—antioxidants that amp up your body’s detoxifying enzymes—give watercress its distinctive bite. Studies suggest these compounds may even help prevent cancer and lower cholesterol.

How to Use Watercress

Watercress is traditionally eaten raw, added to soup, or sautéed until it is slightly wilted in a savory salad with cucumbers and oranges. If you need an entree option to pair with your salad or soup, watercress pairs well with salmon and chicken.

COOK THIS! and these!