Hello all and Happy Friday! The week is over and we are looking forward to next week’s menus! We are delighted to have Asian pears again and so excited for Elstar apples! Why? Because these two tree fruits are more than just nutritious snacks. Let’s find out how… 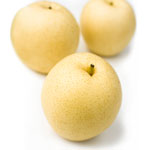 The Shinseki Pear, or Asian Pear, is actually an apple pear! They are sweet with a hint of honey in taste. They feature firm skin and flesh. Shineski Pears have the same mouth feel and texture as an apple with none of the soft or gritty qualities associated with eating a pear. They also have dark brown seeds and a firm core.

The Apple Pear is a relatively new fruit to most people, although they have been grown in California since the Gold Rush days, when Chinese miners planted them in the foot hills of the Sierra Nevadas.

There is no need for store-level ripening… Apple Pears ripen on the tree and are ready to eat when harvested. The long storage life of the Apple Pear is one of its best features: they will “store” for 10 to 14 days at room temperature, and three to four weeks in the crisper of a refrigerator. 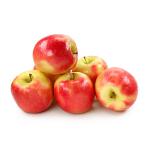 We don’t feature the apples as often because these ones are just a little bit more special. And because there very rare! We like to support the growers that continue to cultivate the old varieties so we will be offering several different heirloom varieties for sale over the next several weeks.

The Elstar apple was developed in the Netherlands in the 1950s. It’s a popular apple in most of Europe. It is a late season apple, ripening in the early Fall.

These sweet and tart apples are perfect for applesauce, apple pie, salads, or apple pancakes! Yumm! They’re for sale this week by the pound so don’t miss out!

Also for sale this week is a new blend of coffee created by the New Roots Organics Team!! A unique and special blend specifically for our NRO foodies! Roasted by Middlefork, we are very VERY excited for you all to try our fantastic new blend!

What are you looking forward to next week? Share your likes and recipes on our Facebook wall!

This entry was posted in New Roots Organics, organic produce, Tips and tricks. Bookmark the permalink.