Hello all and Happy Friday! Next week, our bins will be filled with some pretty awesome produce. We’d 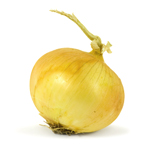 like to especially shed light on one of our favorites, Walla Walla sweet onions – and you can only call it a Walla Walla if it is in fact from there. 🙂

Walla Walla is famous for its sweet onions. And depending on which source you talk to, its origins may be a little different each time:

The story of the Walla Walla Sweet Onions began over a century ago on the Island of Corsica, off the west coast of Italy. It was there that a French soldier, Peter Pieri, found a sweet onion seed and brought it to the Walla Walla Valley.

This Sweet onion developed over generations through the process of carefully hand selecting onions from each year’s crop, ensuring exceptional sweetness, jumbo size, and round shape. Today’s growers realize they’re not just raising sweet onions, but cultivating a tradition.

In 1890 Giovanni Arbini left his native Italy and settled in the Walla Walla valley with aspirations of beginning a new life in America. He soon became a truck gardner and was one of several Italian onion growers. However, it is Giovanni Arbini who is credited with the development of the Early Walla Walla Sweet Onion.

In 1923, Giovanni Began a process of bulb selection after discovering the early maturation of some of his onions in late June, weeks ahead of the usual July crops. By 1925, this premium variety of onion was well-established as the early Arbini. In the 1960’s the onion became more widely identified by local residents as the Walla Walla Sweet Onion.

It all began in 1905 when Joe Locati, the grandfather of today’s owner, first arrived in the Walla Walla Valley leaving Italy behind. Joe worked for a French immigrant by the name of Pete Pieri who brought the original onion seeds with him to Walla Walla from Corsica, Italy. Little did they know that they were sowing the seeds of a great business that would grow and expand for years to come.

In 1909, Joe ventured out and bought his own farm along the foothills of the Blue Mountains and began to raise his own crop of onions. By the 1940s, Joe’s sons, Ambrose and Pete, took over the running of their father’s farm. The sons, along with their cousin Virgil Criscola, started the first onion packing shed in the Walla Walla Valley in 1949. To this day, packing sheds continue to provide a cleaner and higher quality pack for the onions and thus provides a better product for the consumer.

Now Michael Locati continues the family heritage as a grower, packer, and shipper of delicious Walla Walla Sweet Onions. The original varieties passed down from his grandfather remain, while new innovations help to improve each years product. One such innovation is a method known as “topping and tailing”, which makes the sweet onions much more visually appealing.

No matter which farm you get yours from, the sweet onions have traveled here far from Europe with tradition and taste that can now only be found in Walla Walla.

The mild taste of a Walla Walla Sweet Onion is not due to sugar, but rather a low sulphur content, which is half of an ordinary yellow onion.

Walla Walla Sweets are a good source of Vitamin C, are sodium free, contain no cholesterol and only 60 calories.

If each Walla Walla Sweet is kept separate in a cool, ventilated location, it can be stored for up to 3 months.

Do not store onions with potatoes or other produce items that release moisture. When kept dry and cool or refrigerated, onions can keep longer than 4-8 weeks. Chopped or diced onions can be frozen for future use.

Enjoying your Sweets (from wallawalla.org):

These summertime Sweets taste best fresh, tossed in salads or make wonderful toppings for pizzas or fillings for quiches. Look for a round shape, elongated neck, and dry, paper-thin skin when buying Walla Walla Sweet Onions.

We are definitely excited for these onions next week! Be sure to celebrate their greatness next weekend, July 14-15 at the 2012 Sweet Onion Festival.

Also if you are getting peaches next week, do not store them in the same bowl as bananas- they will ripen too quickly! The peaches should be ready to eat within 2 days after receiving your box! Leave them out of the refrigerator until then.

This entry was posted in New Roots Organics, organic produce, Tips and tricks. Bookmark the permalink.