Hello all and Happy Saturday! We are very excited for next week’s bins! We are especially excited for our stone fruit: pluots and apricots!

The pluot is one of my favorite fruits. It has a sweet and unique flavor, plus a cool story.

(From wisegeek.com) The strangely named pluot is a hybrid of the plum and the apricot. The actual ratio works out at about 70% plum and 30% apricot. The pluot is extremely sweet; this is because it has a very high sugar level. Although pluots are a cross breed they mainly look like plums.

Pluots are sometimes sold by the name of Dinosaur egg due to the strange dappled coloring on some types of the fruit.

Many people are suspicious of pluots thinking that this strange fruit must be genetically engineered, but this is not the case. Pluots were first sold in 1989 and were developed by a Californian fruit breeder called Floyd Zaiger. It took Zaiger several generations of cross breeding before the pluot we know today finally emerged.

The process involved in the hybridization is very complex. The climate control must be exactly correct. The process is so precise that pollen is transferred with a tiny brush. Pluots are now registered as Zaiger’s Genetics. There are now at least 25 different varieties of pluot available in stores.

We’re also very excited for one of the pluot’s parents, the apricot! A summer staple, 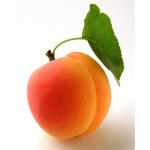 apricots are delicious in salads, desserts, drinks, or on their own! They are the perfect snack on a hot summer day. They, too, have an awesome history!

(From apricot-oil.com) Apricots grew as a wild fruit for thousands of years in China, where they were first cultivated, probably more then 4000 years ago. First character in Chinese alphabet dedicated to apricot dates somewhere before 2000 BC. It was believed that apricot has good influence on fertility at women.

The real center of diversity of the apricot is northeastern China near the Russian border (in the Great Wall area) and not Armenia as the name suggests (Prunus Armeniaca).

With the strong sensory appeal of apricots’ delicate, velvety skin and intensely sweet fragrance and flavor, apricot fruits traveled across the Persian Empire to the Mediterranean where they flourished. First apricots were brought to Middle East by Chinese silk traders and later introduced to Southern Europe by Alexander the Great – in the 4th century BC.

Romans began cultivating apricots about 100 BC (Pliny). Ancient Greeks called them “the golden eggs of the sun”. By the 16th century, apricots were successfully cultivated throughout the Northern Europe. King Henry VIII’s gardener brought the apricot to England from Italy in 1542. The biggest growing brakethrough was achieved by Lord Anson at Moor Park in Hertfordshire, producing the European favourite variety called Moor Park.

The Spanish also took their part in spreading this heavenly fruit – they brought the apricot to the New World, first planting it in Mexico, and later, in their California missions. California is today leading State in the USA regarding the produce of apricots.

Delicious and nutritious, we cannot wait to get our hands on these! Be sure to share your favorites next week on our Facebook page!
This entry was posted in Uncategorized. Bookmark the permalink.